Written Declaration Nr. 32: the race for signatures has started!

PRESS RELEASE – STRASBOURG, 22 October // COFACE is glad to announce that the Written Declaration asking for the designation of 2014 to be the European Year for Reconciling Work and Family Life was presented on Monday 22 October in the European Parliament in Strasbourg.

Written Declaration 0032/2012 states that “better support for reconciliation measures will enable women and men in all kinds of family models to exercise greater choice in balancing work and family life on the basis of their individual needs and preferences, and will also contribute to achieving major policy objectives of the EU”. 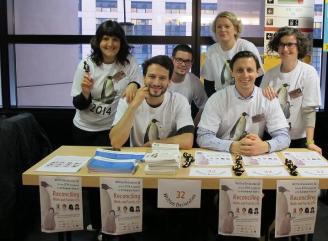 The Secretariat of COFACE is now in Strasbourg to ask and urge the Members of the European Parliament to sign the Written Declaration nr. 32, said Agnes Uhereczky, COFACE Director, in the hope that many will sign, as hopefully many MEPs will get on board of this initiative, that could make a difference in the lives of many citizens.

COFACE, together with the European Alliance for the EY2014, is trying to bring attention to the fact that creating and promoting policies that enable the reconciliation of work and family life would be a win-win situation – both for individual EU citizens, as well as for the European Union as a whole.

Download this press release in pdf version: Written Declaration Nr. 32: the race for signatures has started!

1 Response to Written Declaration Nr. 32: the race for signatures has started!