In his State of the Union speech last Tuesday, President Obama urged the country to come together for gender equality in the workplace. He stressed that women still make 77 cents for every dollar that a man makes.

He made a reference to the idea that today’s employment policies have not caught up with modern ideas about gender equality. 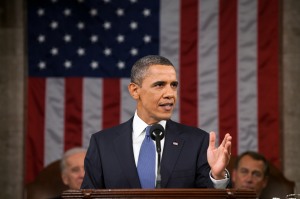 « Today, women make up about half our workforce. But they still make 77 cents for every dollar a man earns. That is wrong, and in 2014, it’s an embarrassment.
A woman deserves equal pay for equal work. She deserves to have a baby without sacrificing her job.
A mother deserves a day off to care for a sick child or sick parent without running into hardship – and you know what, a father does, too.
It’s time to do away with workplace policies that belong in a “Mad Men” episode.
This year, let’s all come together – Congress, the White House, and businesses from Wall Street to Main Street – to give every woman the opportunity she deserves. Because I firmly believe when women succeed, America succeeds. »

President Obama put strengthening women front and center as a solution to strengthening our nation’s economy and we applaud him for that. Could this happen in your country?